An interactive search and find game

The unicorns have had enough of Rainbow Valley. They love playing hide-and-seek, but they’ve exhausted all of their favourite hiding places and have decided to leave their tranquil forest in search of unbridled adventure.

Ruby, the leader of the blessing (did you know that’s the name for a group of unicorns?) has carefully planned a whistle-stop tour of the best hide-and-seek sites the world has to offer. One thing is for sure, the unicorns are about to embark on the trip of a lifetime!

Seven magical unicorns are hiding in the image below … Can you spot them all?
Click on the hidden unicorns if you can find them!

by Paul Moran and Sophie Schrey

Follow a colourful blessing of globetrotting unicorns as they gallop around the world on an incredible whistle-stop tour.

From a star-studded film premiere and a flamboyant festival, to a wild safari adventure and a beautiful tropical beach, there are 17 intricately illustrated scenes to search, with seven sensational unicorns and ten bonus items to spot in every location. 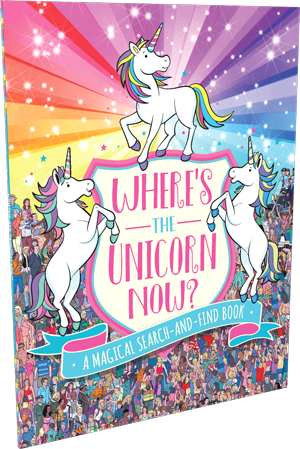 by Paul Moran and Sophie Schrey

The hotly anticipated sequel to the 2017 bestselling title Where’s the Unicorn?

The Seven Unicorns of Rainbow Valley have become a worldwide sensation. Due to popular demand, they are off on a tour to meet their super fans. So where are the unicorns, now? Seek them out in every scene – from the bright lights of Broadway to the excitement of Rio Carnival.

There are 17 intricately illustrated scenes to search, and seven magical unicorns to find in every scene.

Games for your phone

This ultimate search app challenges you to find 7 friendly unicorns among each colourful and vibrant scene in their adventures. Follow the legendary unicorns as they jet off across 20 exciting levels.

Move over Where’s Wally, the meerkats are in town!

A family of meerkats are making a round-the-world trip, making mischief wherever they go. They’ll be visiting some of the world’s most famous and popular places: your task is to spot them in the crowd.

This ultimate search app challenges you to find a family of 10 meerkats among each colourful and vibrant scene in their adventures. Follow the meerkats across 24 exciting levels, as they wend their way from the bustling streets of New York to the carnival in Rio, Great Barrier Reef, Moscow, and more.

Any cookies that may not be particularly necessary for the website to function and is used specifically to collect user personal data via analytics, ads, other embedded contents are termed as non-necessary cookies. It is mandatory to procure user consent prior to running these cookies on your website.

Our Where’s the … games are interactive search and find, hidden object adventures, in which you have to find various hidden objects in a picture. On the game page, you’ll be presented with a ‘who’s who’ of characters or objects to find:

Can you help find them all? The scene you’re searching is full of lookalikes.

Close this page to begin your search and find adventure! You can return to these instructions at any time by clicking the ‘How to Play’ button.